Although rhinoplasty can be performed under general anesthetic, 95% of Dr. Brown’s patients elect to have it done under IV or “twilight” anesthesia. There are several hundred steps performed in rhinoplasty, an operation in which experience is
an important factor. Dr. Brown prefers to use a little light packing for 48 hours, and a cast which is removed after 1 week. Some noses benefit from a “touch up” procedure and the likelihood of this will be discussed at the initial
consultation. Pain is very modest and easily controlled by painkillers for the first few days. In no other operation is it more true that it is “the art of the possible” and therefore a lengthy pre-operative discussion is required to ensure
that the patient has appropriate expectations. This can be helped by a review of pre and post-operative photos of patients on whom Dr. Brown has performed this surgery on.

This 42 yr. old complained of the width and profile of her nose. The nasal tip was moderately narrowed to harmonize with the upper part of the nose. In addition to shortening and rotating the nose, cartilage was borrowed from her right ear
to create a more elegant projection of the nasal tip. 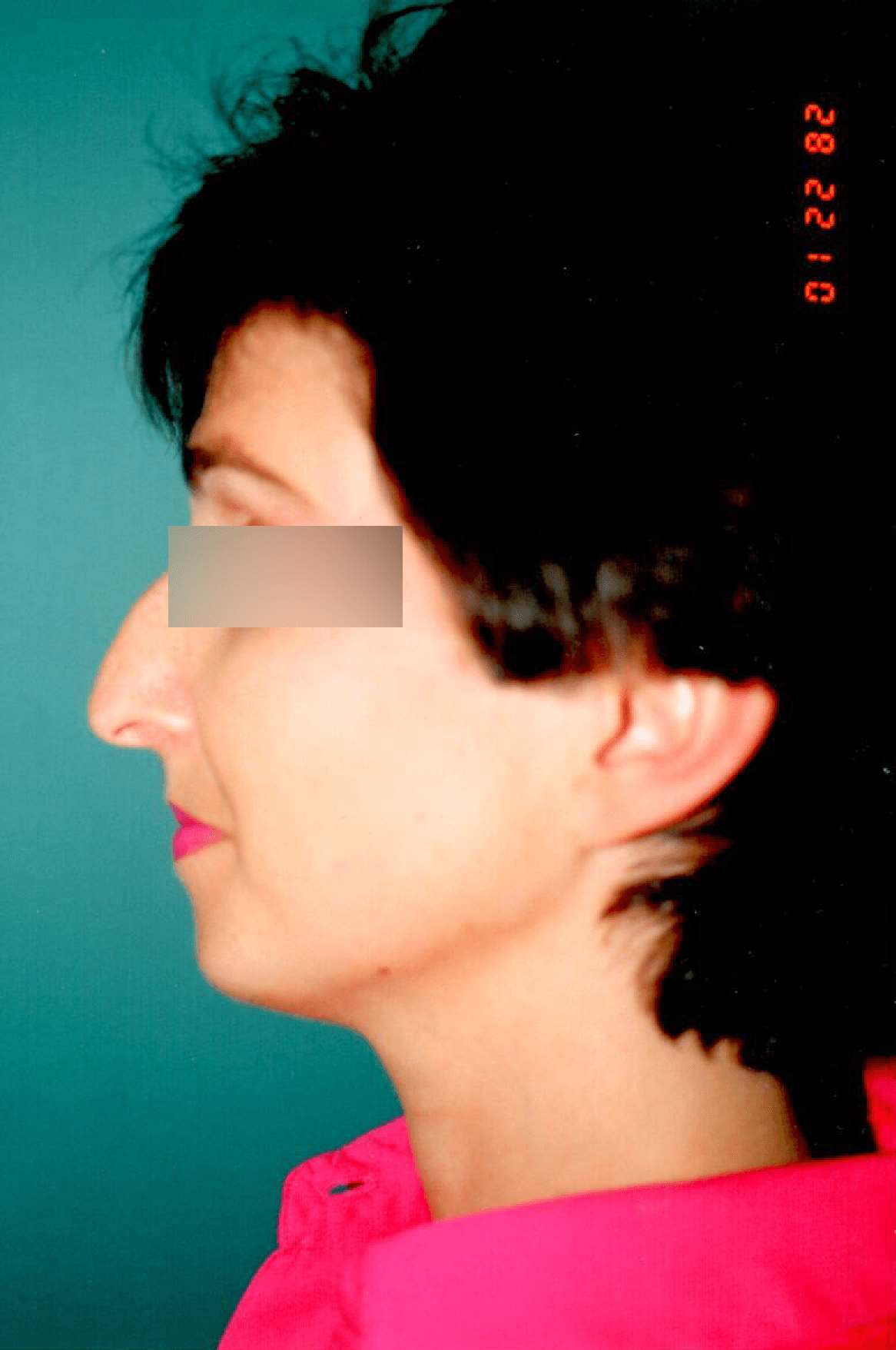 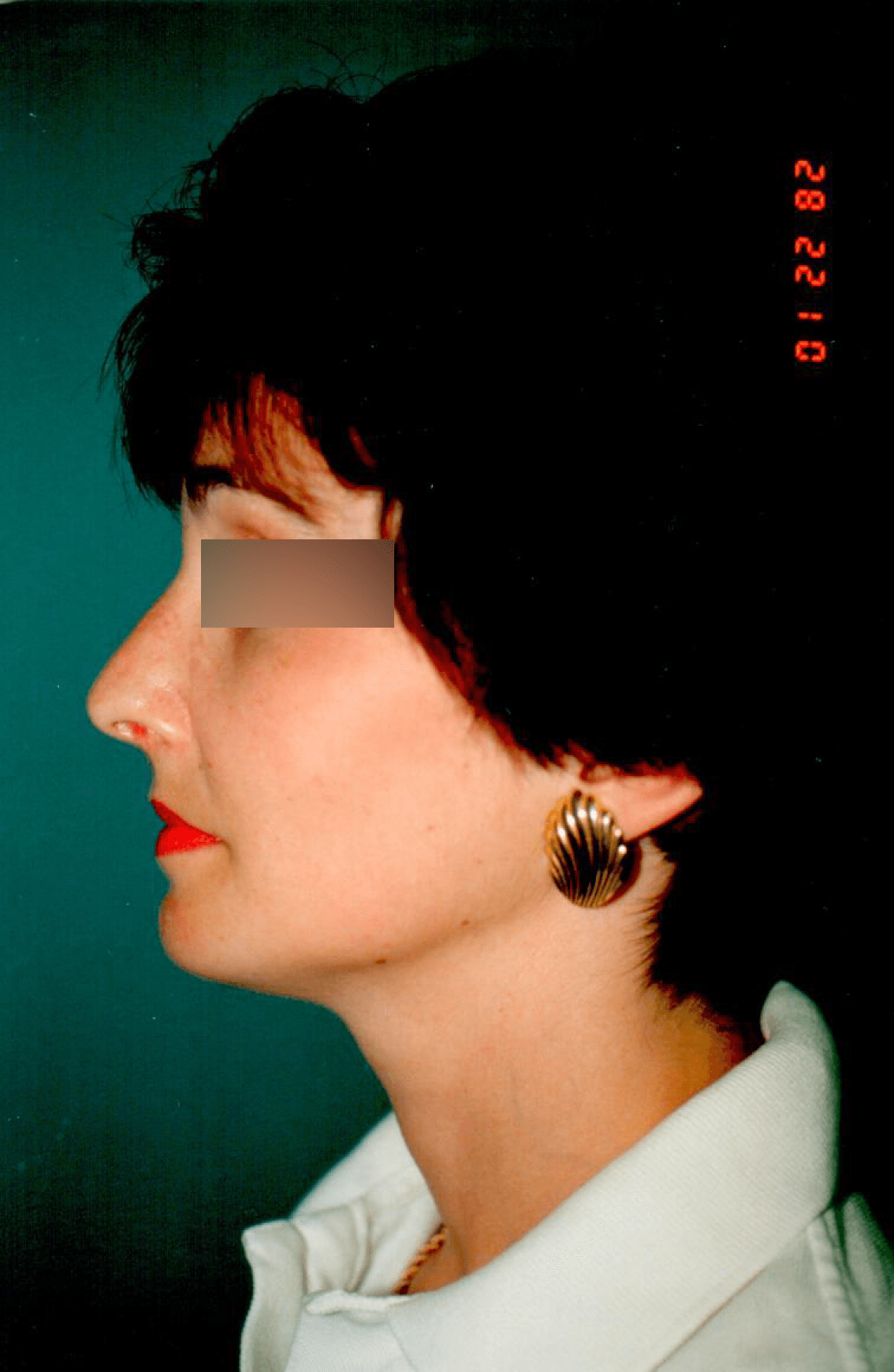 This 42 yr. old patient didn’t like her nasal profile, feeling that the length and hump should be corrected. There are certain occasions in which the suggestion of additional surgery is appropriate. Because of the receding chin, the nose appears even larger. Thus a subtle increase in chin projection was carried out through an incision hidden inside the mouth. The nose has been modestly shortened and a natural subtle curve has been created. 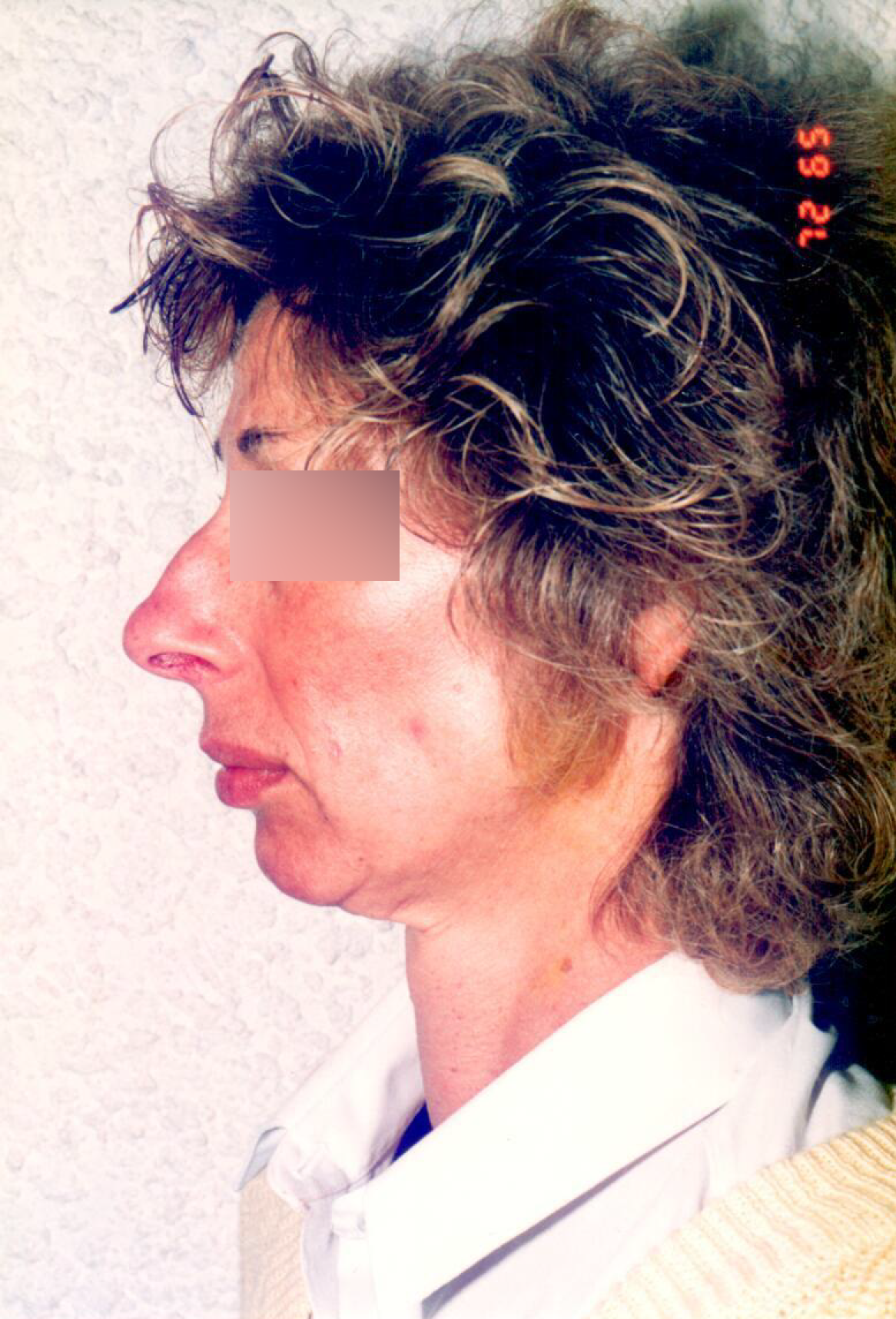 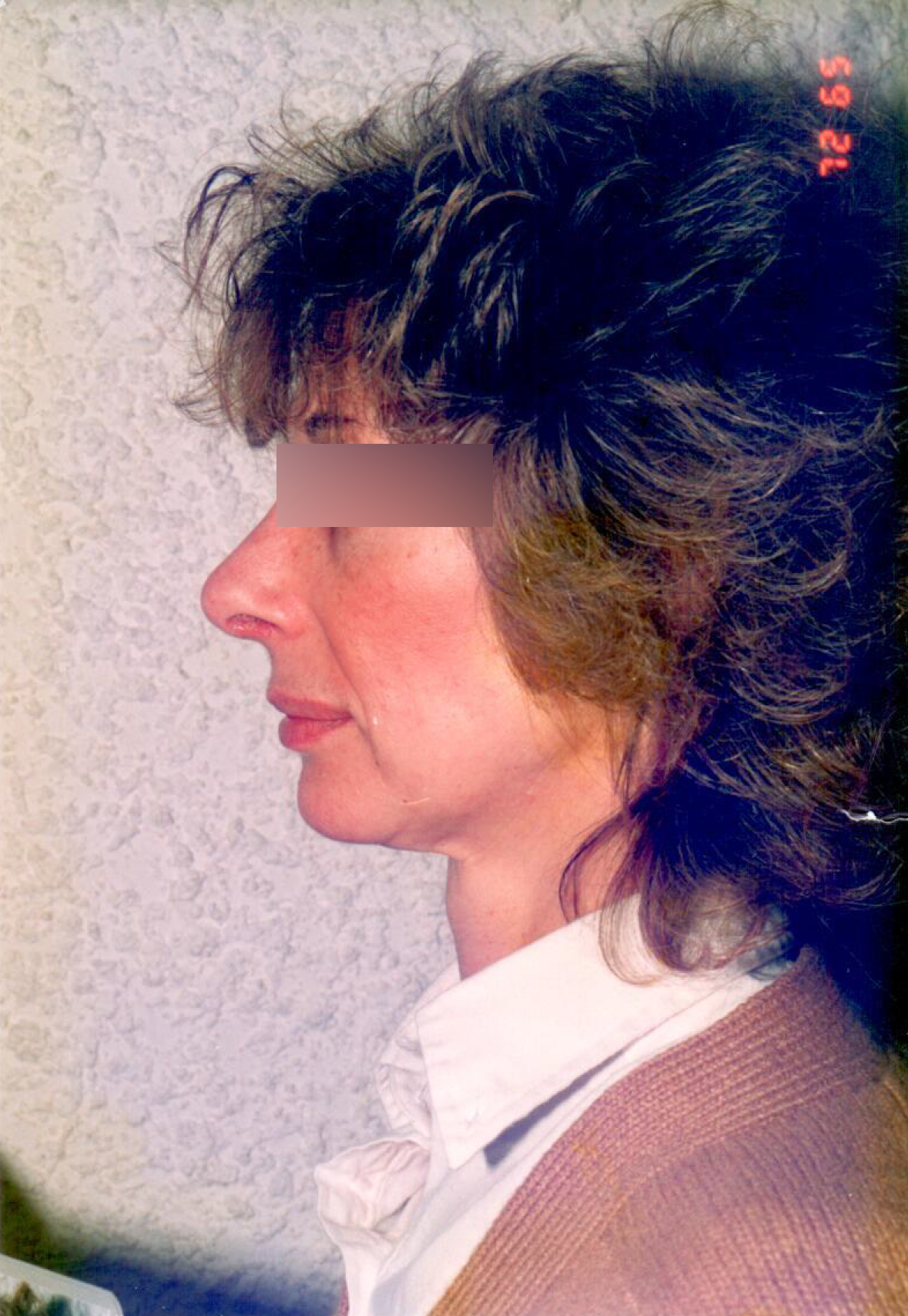 This 36 yr. old patient was bothered by the size and hump of her nose. The nose has been reduced in size and helped by insertion of a chin implant put in through an intraoral incision. Both chin and nose were taped for 1 week. Incisions
inside the mouth require liquid diet in the immediate post-operative period. 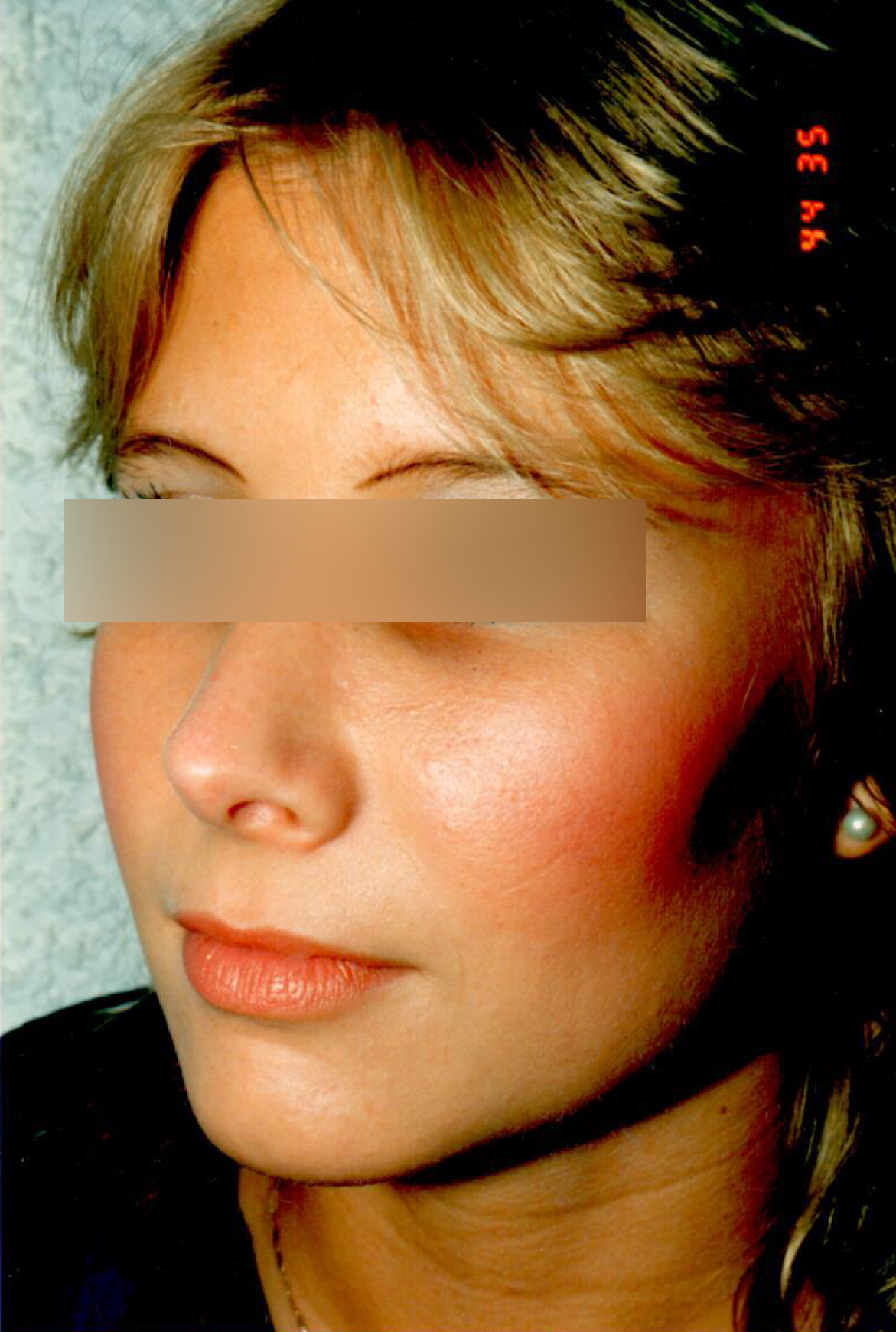 This young woman had an overly projecting tip which can best be appreciated from the base view. The hump was reduced and the tip cartilages were rotated backward to give a more pleasing configuration. The transverse scar can be seen in the early healing
phase where it is necessary to use a little light makeup to camouflage it. The patient was seen again 2 years after her surgery and is still extremely pleased with her results.

This 19 yr. old patient felt self-conscious about the bulkiness of her nose. She sustained a significant improvement overall although the tip is still a bit generous. This is because it is necessary to leave a solid cartilage structure
beneath to prevent nasal collapse. Although the nose is significantly improved upon cast removal, some further refinement can be seen over the ensuing year.

Rhinoplasty is all
about balance. Although the patient’s tip was somewhat large and drooping, she needed the upper nose widened. This was done by slightly reducing the hump, applying cartilage grafts on the right side, as well as a subtle shortening of the nose
and build up of the tip with ear cartilage. Although this patient needed only one operation, it is sometimes necessary to do a touch up procedure to get the best result possible. The likelihood of this is discussed during the original
consultation. 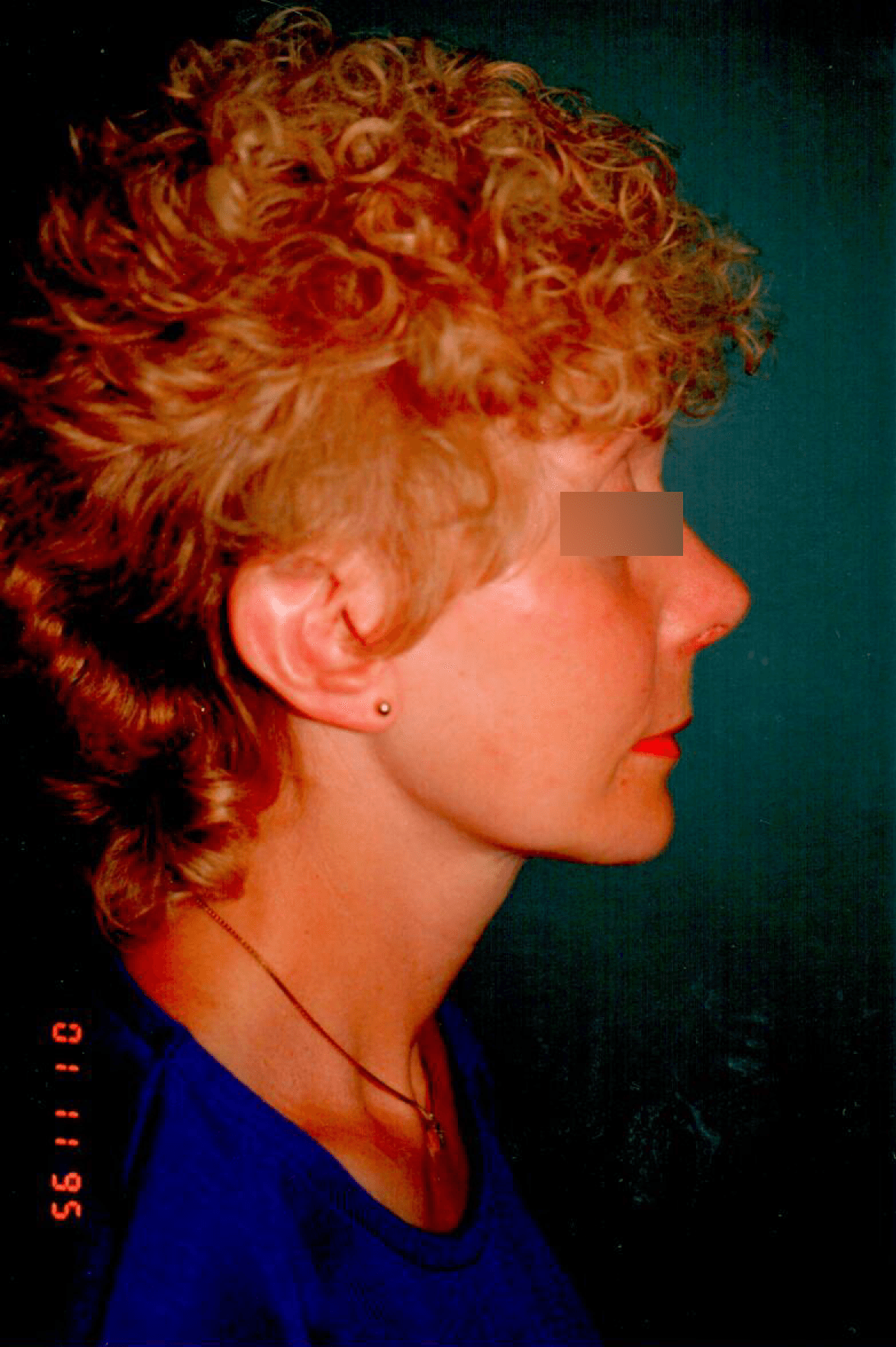 This patient
was referred after sustaining an over resection of the dorsum (top) of the nose, resulting in a “ski jump” deformity. The tip cartilages were normalized by repositioning as well as further coverage from using fascia. In addition the dorsum was
built up, resulting in a less “operated” look. It is extremely important in nasal surgery, as in all cosmetic surgery, to have a natural appearance afterwards.

This pt. was
concerned about her nasal width and crookedness at the bridge. The left side of the nose was moved toward the midline and the tip brought into balance. A basal or “worm’s eye” view reveals a natural and more elegant tip. The operation was
carried out using “twilight” sedation as are 95% of Dr. Brown’s rhinoplasties. General anesthesia is also available upon request.

This patient had a naturally occurring over projection of her nasal tip giving a “scooped out” look to her nasal profile. The surgery addressed this problem by rotating the tip cartilages backwards as well as resculpting and narrowing the
tip. The surgery was performed by an incision inside the nose as well as across the bottom of the nose, the only place where stitches are visible. These stitches are removed 4 days post operatively, and the incision can be easily covered with
makeup until it fades.

This 31 yr. old patient complains of longstanding crookedness to her nose. The tip was refined, the left side of the nose moved toward the midline, and sculpted cartilage was used to fill in the concavity on the right side. Patients wear a
cast for 1 week and must avoid any activities where the nose could be injured for 3 weeks. Most patients can return to work in 7-10 days.

This 45 yr. old
woman was referred after having a rhinoplasty carried out many years earlier in which the nose and tip were over resected. A series of cartilage grafts were used to balance the tip and fill in the profile concavity. The view from below shows
the subtle scar several months post operatively. Operations like this are more complex because of the anatomic problems as well as previous scarring.

This 37 yr. old
patient complained of a very bulbous and crooked tip. The side profile was already very attractive. The cartilages in these kinds of tips are not only large but are rotated out of position. Correction was accomplished by repositioning the
septum, derotating, sculpting and moving together the tip cartilages. The changes can be easily seen from the view from below. The patient remains very pleased some 21 yrs. after her surgery.

This young woman was concerned about the size of her nose and her short upper lip. The dorsum of the nose was reduced and the nose shortened but not rotated in order to lengthen the upper lip. The angle between her upper lip and nose was
appropriate for her height. This is important as gaze patterns vary with the patient’s height. The nose can be tilted a little more on short people as taller people will not be looking directly into their nostrils (Dr. Brown may be asking
about the height of heel you prefer).

This 66 yr. old gentleman has rhinophyma, a condition in which the tip tissues become very large. This was helped by sculpting down the excess tissue using a dermabrader. The patient was thrilled with the results and feels more confident
with his refined nasal tip.

This 34 yr. old patient objected to the hump on his nose as well as his weak chin. The nasal profile was modified, the tip enhanced with cartilage grafts and the chin improved by inserting an implant. The chin implant was inserted through
his mouth so there would be no visible scar.

This 19 yr. old model wished to have some tip refinement. This was performed through an open incision placed at the base of the nose. This generally heals imperceptibly and allows sophisticated rearrangements of the cartilages.

This 30 yr. old patient had his nose fractured multiple times boxing. In addition the base was somewhat wide. The nose was built out using an implant wrapped in fascia with multiple layers of cartilage and then the base of the nose was
narrowed.

This 42 yr. old
patient objected to the curving droop of his nose. The dorsum of the nose was slightly reduced, and then the nose was shortened and slightly rotated. The tip was built up with cartilage grafts resulting in a natural improvement. The nasal cast
was removed at 7 days. 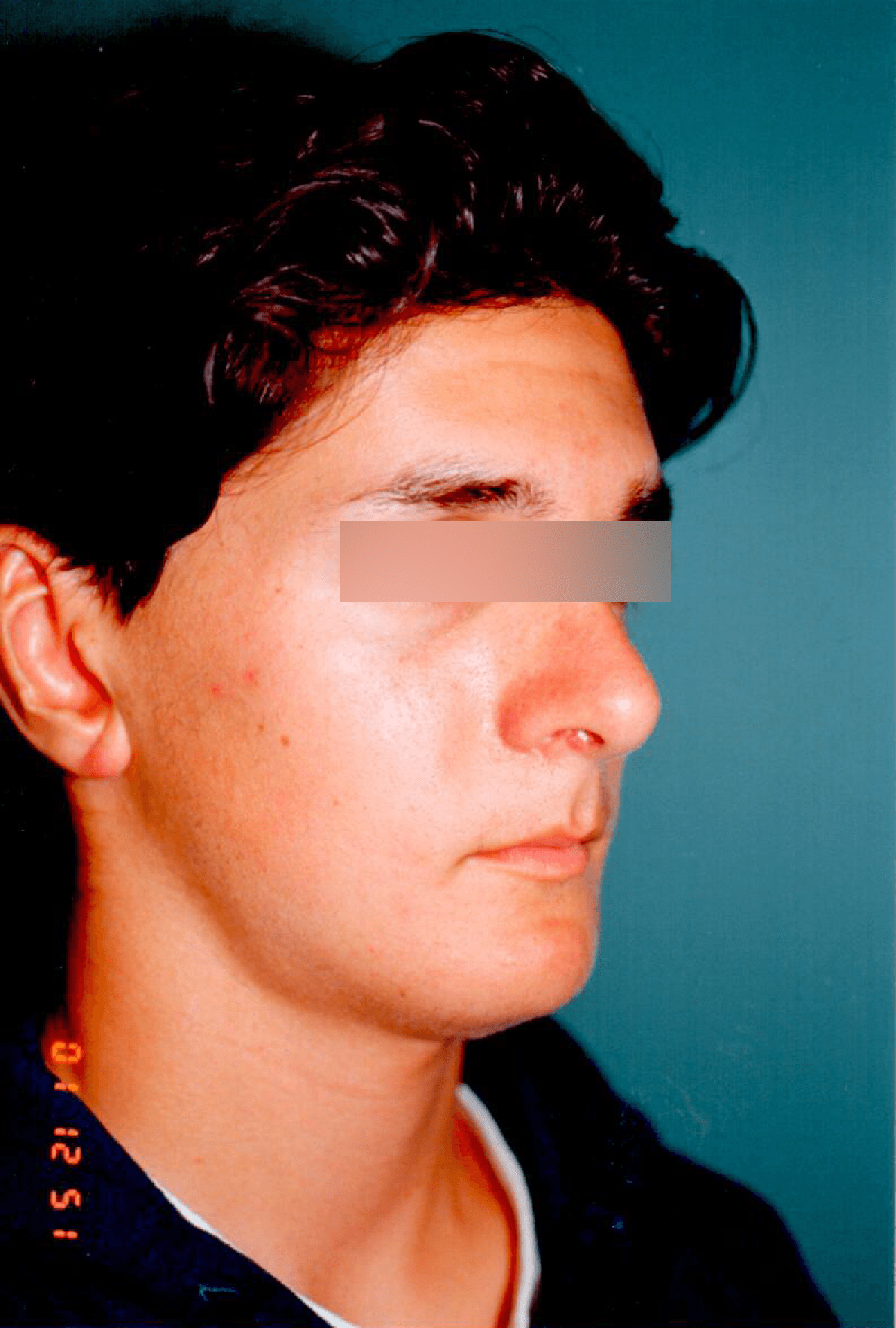 This 19 yr.
old patient objected to the overall size and projection of his nose. The nose was reduced in projection, narrowed and shortened. It is important to keep the nose and its proportions appropriate for the male face.

This 36 yr. old gentleman objected to the length of his nose. The dorsum has been dropped, narrowed, the overall nose rotated and structural grafts used to get good tip projection. The patient was pleased with the natural results.

This 44 yr. old
gentleman had a post traumatic deformity to his nose. The nose was refractured and then built up with layered cartilage grafts. A nasal cast is removed at 7 days and sutures removed at 5 days. Most patients are able to return to work at 10 days
post surgery.

This 21 yr. old
patient wanted his nose “a little straighter” but wanted to maintain his ethnic identity. The rhinoplasty was carried out to soften the profile but still maintain a curve on the side profile. The patient was very happy with the results.

This pt. had a traumatic defect which was built out with septal cartilage. The upper part of the nose was fractured and moved inward.

This patient complained of the overall size and length of his nose. There are restrictions on how much a nose can be safely reduced in size, and the object of this procedure was to afford better overall balance of the aesthetic elements of
the nose.